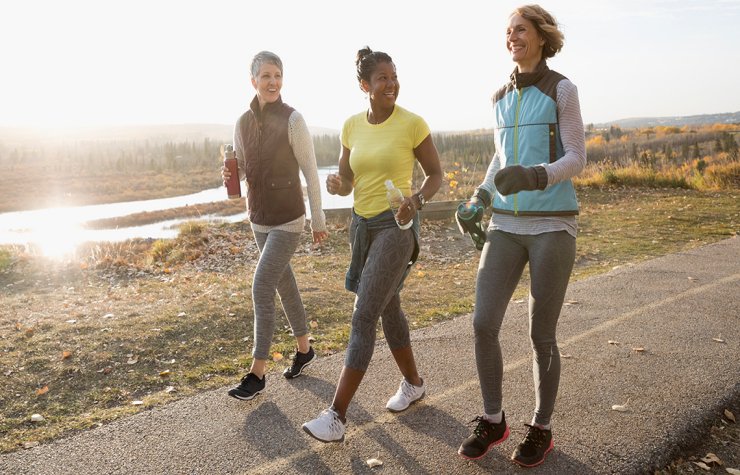 Walking just might be the perfect exercise: It’s low impact, reduces the risk of high blood pressure, heart disease and dementia; strengthens your heart, boosts mood, raises vitamin D, burns calories and builds muscle.
Harvard University created a chart that compares the effects of aging with the effects of exercise and found that, in almost every category, exercise counteracts the effects of aging. Now, new studies offer two more reasons to go for a brisk walk.

Research published in the March 2017 issue of “Cell Metabolism” found that a brisk walk could help slow the aging process. The study broke 72 participants into two age groups (18–30 and 65–80) and three exercise groups (high-intensity interval training, strength training and HIIT with strength training). At the end of the 12-week period, researchers noted that participants in the HIIT group, which included biking or “difficult” treadmill walking, had significant changes at the cellular level.

HIIT caused cells to make more proteins in the mitochondria, which take in and break down nutrients and create energy; and the ribosomes, the cell structures that make protein and repair cell damage. In the younger group, mitochondrial function increased 49%; the increase was 69% in the older group.

What this means, according to K. Sreekumaran Nair, MD, diabetes researcher at the Mayo Clinic and senior author of the study, is that exercise appears to stop aging at the cellular level. In addition to cellular changes, those in the HIIT group had improved insulin sensitivity, which could reduce their risk of diabetes.

In a statement, Nair said, “Based on everything we know, there’s no substitute for these exercise programs when it comes to delaying the aging process.”

Walking could also be the key to keeping older adults out of the hospital. Australian researcher Ben Ewald, PhD, senior lecturer in epidemiology and at the University of Newcastle, followed 3,253 adults over age 55 and compared the number of steps they took each day (based on pedometer data) with hospital admissions.

The findings, published in a 2017 issue of the “Medical Journal of Australia,” found that those who walked 8,800 steps per day spent one-third less time in the hospital than their more sedentary peers who walked just 4,500 steps per day.

“Physical activity reduces the risk of cancers, heart disease and diabetes, which are the main serious illnesses, so active people are less likely to end up in hospital,” says Ewald.

Although the research was done on older adults, Ewald believes the findings are applicable to all age groups, noting, “The biggest risk to health these days, now that smoking has nearly died out, is sitting down all day. There is no reason to believe that increased activity at other ages would not have similar health benefits.”

The research would also apply to activities other than walking but, Ewald notes, walking is likely the easiest form of exercise for most people to incorporate into their daily lives. “Any activity is good activity,” he says. The key is finding an activity you enjoy and incorporating it into your daily routine.

“The easiest thing is to walk or cycle to work, because by the time you have been to work and back you have also met your physical activity target for the day with no further effort,” says Ewald.

Try wearing an activity tracker to make sure you’re getting at least the 10,000 steps (five miles) per day recommended by the American Heart Association.

HOW TO NATURALLY DETOX NICOTINE FROM YOUR BODY

HAVE YOU FAILED TO LOSE WEIGHT, TRY THESE TRICKS IMMEDIATELY

The Magical Healing Power Of Onions: Put Them Under Your Feet & See Its Benefits