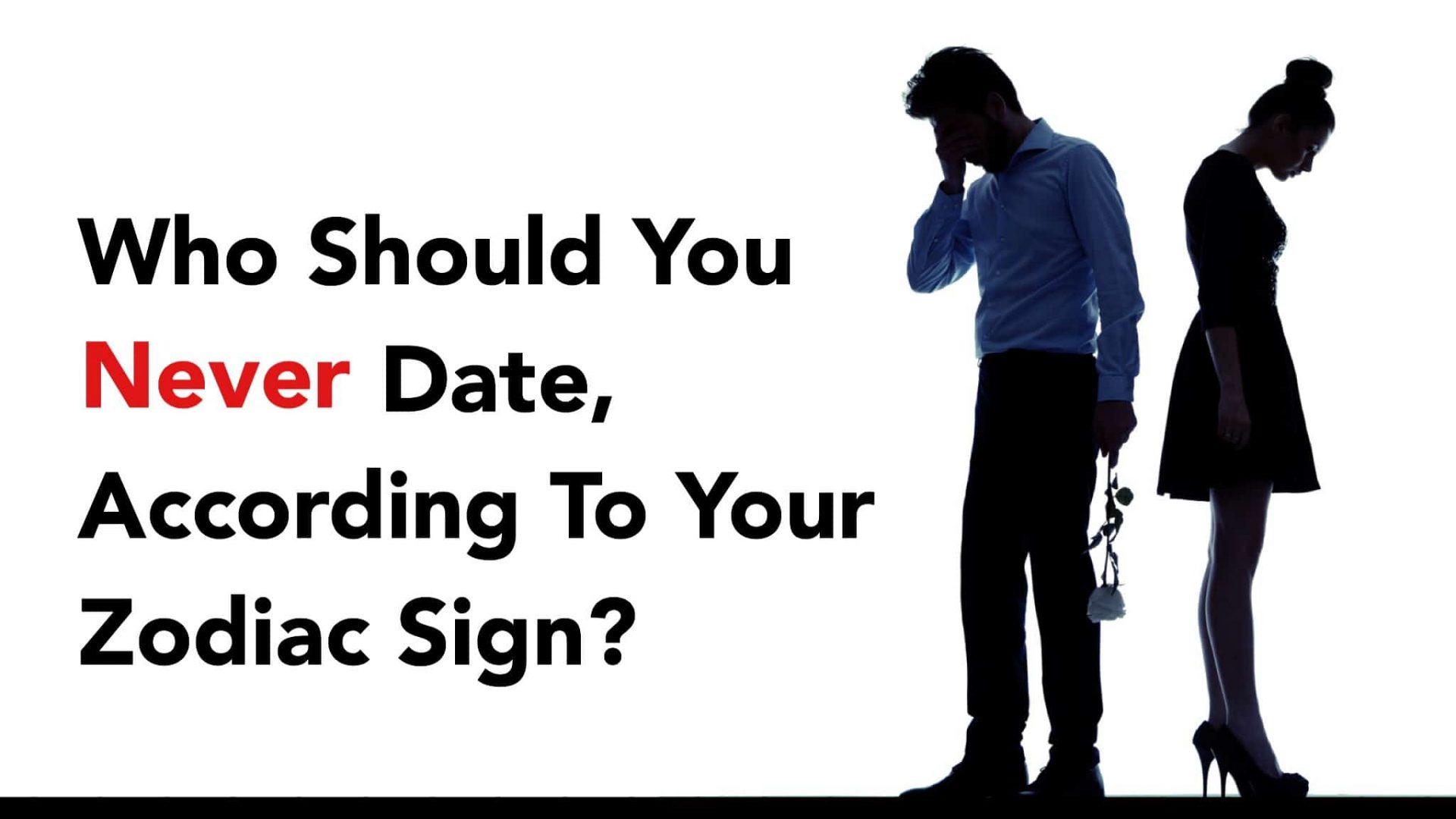 Who you should be in a relationship has been covered before, but which zodiac sign should you avoid? That is a very good question, indeed.

The intention of this piece is not to be negative in any way, only to serve as a warning from what could potentially be a mistake on your part. After all, we want to see you beaming with happiness and light. 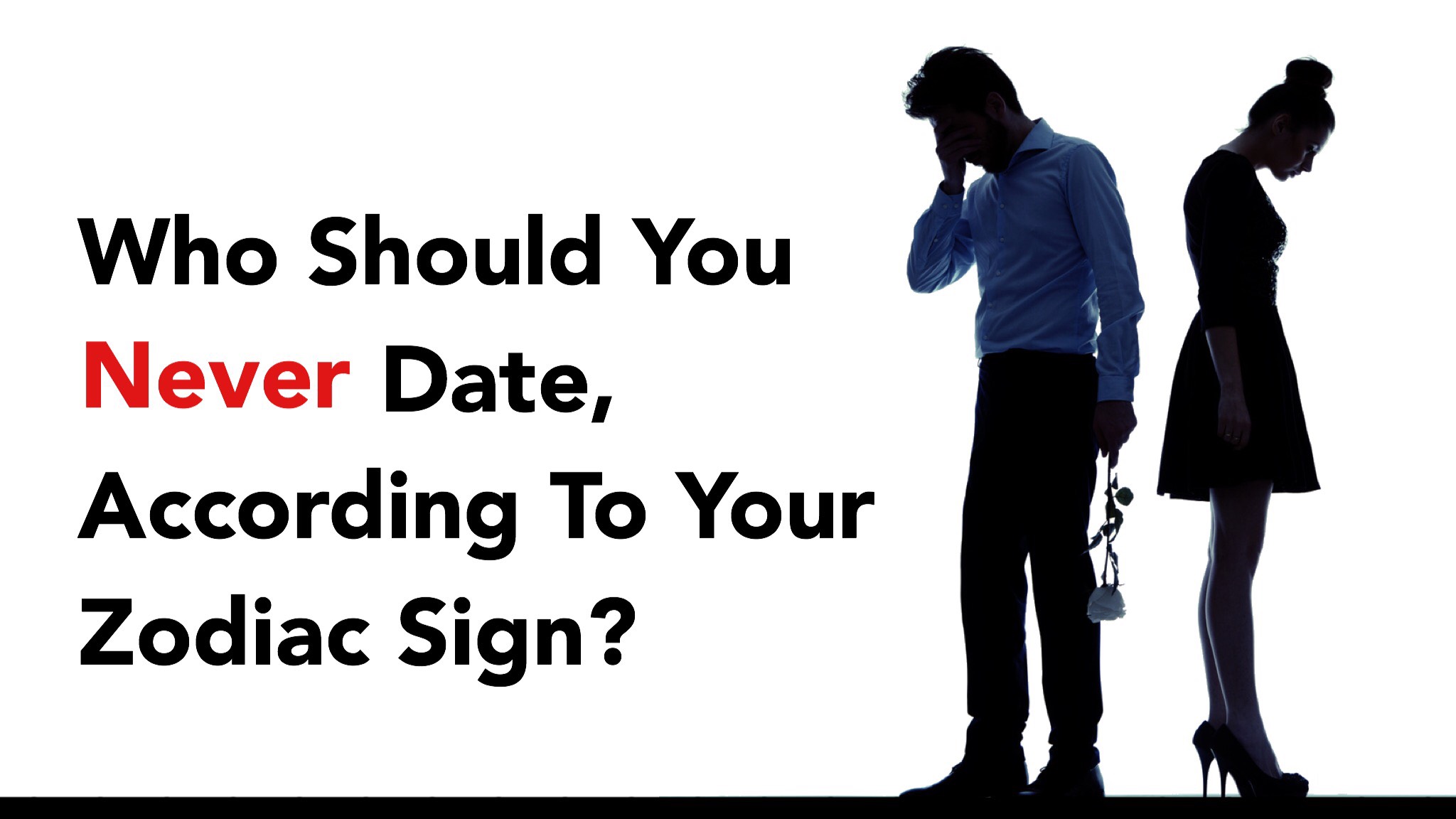 With that out of the way, it is now time to sit back, relax, maybe grab a nicely chilled beverage from your fridge, and read on. Here comes the answer to your question.

WHO SHOULD YOU NEVER DATE, ACCORDING TO YOUR ZODIAC SIGN?

You are the independent Ram. You do your own thing and that is not negotiable. You have no time to think about someone being too clingy. This will lead to you feeling smothered and there is no way you will sacrifice that independence for anything. A potential partner either toes the line or walks away.

Stubborn and jealous Bull, stay clear of anyone who “owns it”. Yes, you are attracted to these larger than life people but the very thought of you sharing your special someone rightly or wrongly sets off alarm bells in your head. That is an animal trap best avoided.

Although the Twin likes to show their love and enjoys a decent social life, someone alike is a no-no. The relationship would turn into a competition, instead of you two savouring what you have. In your case, the old adage fits for a reason, “Opposites attract.”

Unfortunately, the Achilles heel of the great Crab is mood swings and trust issues. You are also very much in tune with your feelings, therefore not having those taken into consideration and accepted by your partner is a dealbreaker. Someone saturated in secrecy gives you suspicion, so solely you must say “See you!,” for your mind would go into overdrive and that particular road would lead to someplace ugly.

You love to give love, majestic Lion/ess. However, not without receiving love in return. If you feel that this is the case including in public, regally walk away. The same goes for someone who does not support you emotionally or “bigs you up”. As the ruler, you deserve greatness bestowed upon you and you love to share it with the ruler of your heart.

Ah, the people-pleasing Virgin. This is how you are on an emotional level. It is best advised to stay away from those who have great difficulty in communicating and people who do not “have it all together” like you. You do not have the time to sift through a train wreck.

You tend to tip the Scales in the showboating stakes, being a very outgoing and sociable soul. If you find yourself in a relationship where you feel insecure and that your self-worth is through the floor, run for the hills pronto.

The deep, yet assertive and sexy Scorpion takes no prisoners. You know what you want and know exactly how to get it. If your partner is not up to par with you, it is time for them to walk the plank. Being a strong sign, you dating someone that is unable to handle your character is like Arnold Palmer playing a round of golf with Captain Hook!

Archers do not like wallflowers. Plain and simple. You are loud and proud and not afraid to show it. You want to show off your love interest to friends and family, yet they are content to hang back because they are nervous. The shy type, the introverted, the ones who seldom come out of their shells, need not apply here.

No guts, no glory! The controlling Goat is another one who should give the shy, quiet ones a wide berth. If you see that your significant other is unable to speak up from your usual stubbornness, then you should back down from further romantic liaison.

A typical Water Carrier likes solitude and shies away from the social limelight. If you date someone like you, you do yourself no favours at all. You two will end up not doing anything to create memories and boredom will set in rather easily. There is a brave new world out there, and doing the humdrum dance with Denis/e decimates your chances of seeing it. Do yourself a favour; date someone different to you.

Our Fishy friend is profound and sensitive. Those who are less than empathetic and/or have an ego greater than the Burj Khalifa are not the catch of the day. Too many jokes could spoil the party for you because they might be taken the wrong way and your feelings may not be spared.

10 Reasons Why You Should Never Give Up In Life

What Can The Prisoner Say To Save Himself?

Things You Should Never Tell A Woman