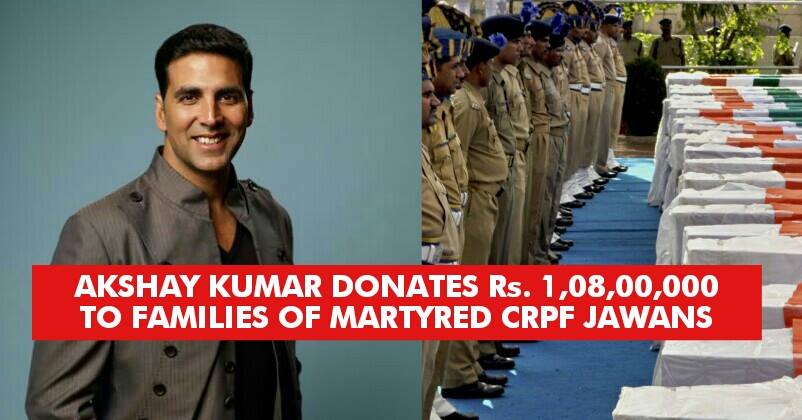 Nowadays, we see many Bollywood celebrities indulging in charity work; while some do it for show off, there are some who do it genuinely for helping others. When we talk of B-Town and charity, the only name that comes to our mind is “Akshay Kumar”.

The Khiladi has earned a lot of respect for his charitable tasks. He doesn’t think twice before giving out a huge sum of money as charity. Yes, Akshay Kumar has a big heart and he has proved it on many occasions. He keeps helping martyrs’ families from time to time by offering monetary help; we salute him!

Once again, Akshay Kumar has donated a whopping Rs 1.08 crore to the families of 12 CRPF jawans who lost their lives on Saturday, in an encounter with Naxalites in Chattisargh’s Sukma District. This happened when the jawans were out on the Road Opening Party (ROP) duty.

According to reports, the Jawans were from the 219 battalion and were killed by a Naxalite group, who launched a surprise attack in the area.

After this incident, Akshay Kumar was constantly in contact with the DIG of Jaisalmer sector north, Amit Lodha, and asked him to share the details of those martyrs.

After getting the information from him, Akshay donated Rs 9 lakh each to the families of those soldiers.

“Akshay himself has been in touch with me and he keeps enquiring about incidents and when I told him about the Sukma incident he immediately told me he would like to contribute and do his bit for the families of the martyred jawans, we are all grateful to him for this kind gesture.”

This is the reason why Akshay always receives appreciation from every corner of the country; he’s a superstar and time and again, he has displayed his helpful nature.

A Compilation Of Savage Text Messages