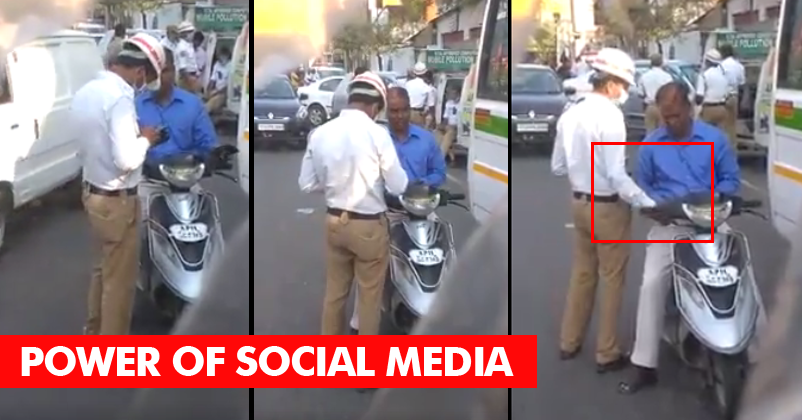 One of the most powerful feature of Smartphones  is to shoot videos when ever needed. Have a look at this video shooted by  Sridhar Vemula at  right time which shows a traffic police man taking bribe from a person for now wearing helmet.  With help videos like these we can for sure reduce corruption in our country where possible.

The Date and timing the video was shot is March 17 at 4.30pm at Himayatnagar junction and  uploaded on the official Facebook page of Hyderabad traffic police by Sridhar.

Sridhar captured this video  at Himayatnagar which showing a home guard is M. Satya Vishnu from Narayanaguda traffic police station taking bribe from a middle-aged man on two-wheeler.

After 24 hours  a response was received from  Hyderabad traffic police  “Action will be taken….”

The video got viral and was shared 10,000 times and viewed  5,00,000 times . On March 20th, Hyderabad Traffic Police responded to the initial post and wrote, “He is being removed from Traffic Department and disciplinary action will be taken as per rule.”

I USED TO THROW AWAY THE SHELL OF WATERMELON UNTIL MY HUSBAND TOLD ME SOMETHING I NEVER KNEW!