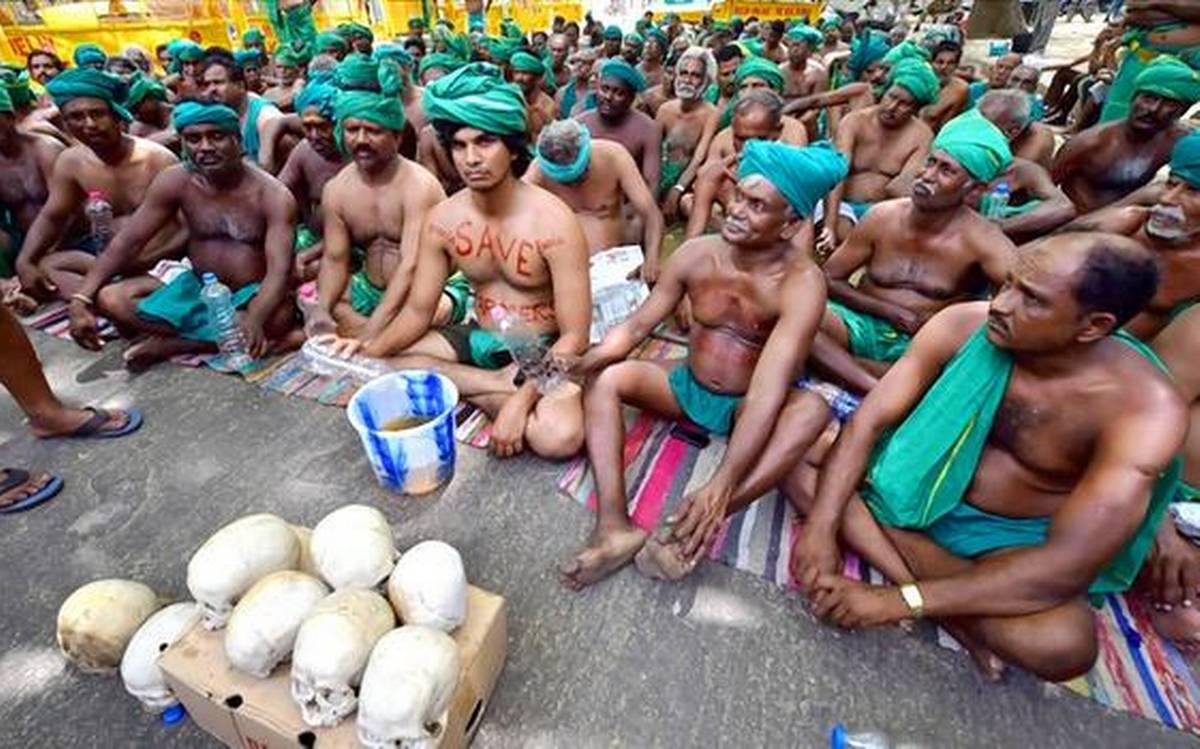 Farmers from Tamil Nadu drank urine collected in bottles as part of an agitation aimed at pressurising the Centre to waive agricultural loans and provide drought relief funds, at Jantar Mantar in New Delhi on Saturday.

The farmers promised to go a step further by eating faeces the next day if the government continued to ignore their demands. “They can arrest us if they want. We will continue agitating,” said one of the agitators at the scene, even as passersby looked away in disgust.

The farmers have been grabbing headlines for their unique, and sometimes bizarre, methods of protest since their arrival in the national capital. Armed with skulls, which they claimed to be of farmers who had committed suicide, they have stripped naked, bitten mice and snakes, conducted mock funerals, and even flogged themselves.

“We are not getting water to drink in Tamil Nadu, and PM Modi has been ignoring our thirst. So, we will have to quench our thirst with our own urine,” said P Ayyakkannu, state president of the National South-Indian Rivers Linking Farmers’ Association, who is leading the protest.

On Wednesday, the farmers had agreed to “wait patiently” for two days, to give the government and ministers some time to get the affairs in order. The decision had come after the farmers met Pon Radhakrishnan, minister of state for road transport and highways, who is the only elected BJP MP from Tamil Nadu.

The minister had allegedly assured the farmers that he would talk to finance minister about their plight and try to come up with a solution by May 15. According to the farmers who met the minister, Radhakrishnan had said that he will try to get all loan collections and payments postponed for a year. He had also assured the farmers that any attempt to seize property, will also be suspended during this time. Ayyakkannu said that the minister had assured them of help in getting new loans, but was non-committal on the other demands, like the interlinking of rivers and setting up of a Cauvery Management Board.

However, as the protesting farmers at Jantar Mantar are yet to hear from the government, many claim that they are being forced to resort to such measures.

“I know it is humiliating to eat and drink our own waste. But, should the government not be ashamed of forcing us farmers to use such desperate measures? If only Modi would meet with us and hear us out,” said 65-year-old Palanichamy, who has been protesting at the site since day one.

The farmers have been demanding intervention by Centre to write off their loans from nationalised banks, a revised drought relief package and resolve the alleged drying up of the Tamil Nadu leg of the Kaveri river. The state government and the Madras High Court have already waived their loans from co-operative banks.

RUKMANI RIAR – SHE FAILED 6TH CLASS, BUT SHE TOPPED IAS EXAM WITHOUT ANY COACHING