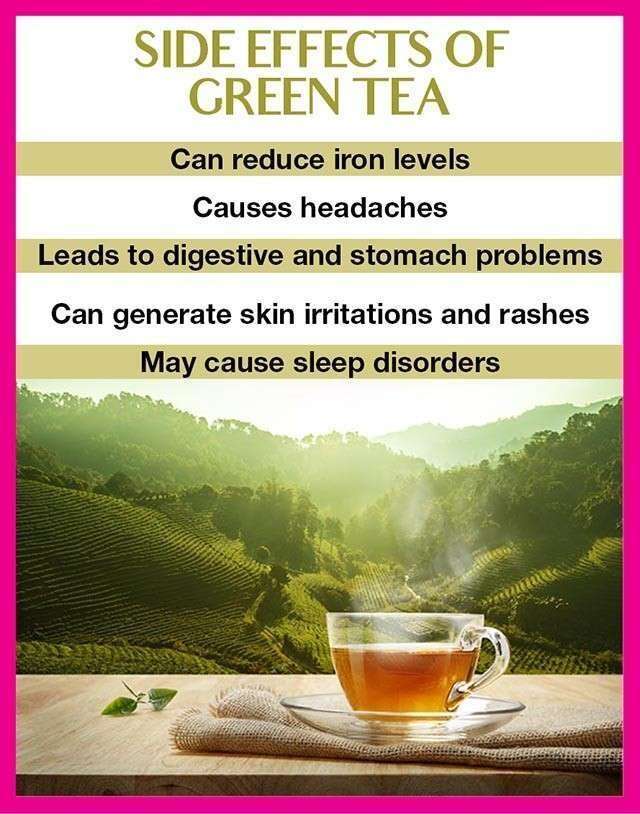 Green tea is mostly safe for adults when consumed in moderation. But people with stomach problems, iron deficiency, people with low tolerance to caffeine, pregnant or nursing women, people with anemia, anxiety disorders, bleeding disorders, heart conditions, diabetic, liver disease and osteoporosis should not consume green tea as it may have side-effects.

Green tea is one of the oldest herbal teas known to man. It gained quick prominence in the West because of its purported health benefits, weight loss being one of the popular ones. Some of these health benefits are backed by studies while some are not.

Green tea is mostly safe for adults when consumed in moderation. Green tea extract is also considered to be generally safe for most people when taken orally or applied topically on the skin for a short period of time. However, drinking too much green tea (more than 5 cups a day) is considered to be unsafe.

Some people have a natural low tolerance for caffeine, and they will suffer these symptoms even when ingesting small amounts. Some may already be suffering from problems that could be further aggravated by green tea intake. Such people should limit green tea consumption to at most 2 cups per day.

Side Effects of Green Tea

Like all teas, green tea contains caffeine; excessive caffeine intake can lead to or aggravate a variety of problems, including the following:

The tannins present in green tea increase stomach acidity that may cause stomach ache, nausea, or constipation. For this reason, green tea is not consumed on an empty stomach in Japan and China.

It is best to drink green tea after a meal or in-between meals. People with peptic ulcers or acid reflux should not consume green tea excessively. A 1984 study concluded that tea is a potent stimulant of gastric acid, which can be reduced by adding milk and sugar.

Sometimes, improper brewing of green tea may also have adverse effects. Green tea is best brewed with water between 160 and 280°F. Excessively hot water may cause heartburn or an upset stomach.

Green tea seems to reduce the absorption of iron from food. Drinking very high doses can actually be fatal. The fatal dose of caffeine in green tea is estimated to be 10-14 grams (150-200 mg per kilogram).

If you have an iron-deficiency like anemia, the National Cancer Institute recommends consuming tea between meals.

Population-based research studies have shown that caffeine is a risk factor for chronic daily headache onset.1

Caffeine exerts obvious effects on anxiety and sleep which vary according to individual sensitivity to methylxanthine.2 It blocks sleep-inducing chemicals in the brain and increases adrenaline production.

Caffeine in green tea might cause an irregular heartbeat. It also stimulates the heart muscles to contract when at rest.

Because caffeine affects the movement of food through the food pipe, alternating contraction and relaxation of the food pipe muscles can cause nausea.

Caffeine has a laxative effect. It contributes to peristalsis (the movement of food through the digestive system). It stimulates the colon muscles to contract and then relax, which results in an increased need to move your bowels.

Caffeine increases the release of acid in your stomach. 4 This causes discomfort similar to heartburn.

Caffeine can decrease the flow of blood to the brain, leading to dizziness and motion sickness.5

Ringing in the Ears

Caffeine can aggravate tinnitus or ringing in the ears.6

Caffeine in green tea might increase the risk of bleeding.

Drinking green tea increases pressure inside the eye. The increase occurs within 30 minutes and lasts for at least 90 minutes.

Green tea extract supplements have been linked to several cases of liver damage. Green tea extracts might worsen liver disease as the caffeine in the blood may build up and last longer.

Drinking green tea can increase the amount of calcium that is flushed out in urine, which can lead to deterioration of bone health and osteoporosis, especially in those who might be predisposed to the same due to other factors. Caffeine should be limited to less than 300 mg per day (approximately 2-3 cups of green tea). It is possible to make up for some calcium loss caused by caffeine by ingesting calcium supplements.

Green tea contains caffeine, catechins, and tannic acids. All three substances have been linked to pregnancy risks. If you are pregnant or breastfeeding, green tea in small amounts – about 2 cups per day – is safe. This amount of green tea provides about 200 mg of caffeine. However, drinking more than 2 cups of green tea per day has been linked to an increased risk of miscarriage and other negative effects.

Caffeine passes into breast milk and can affect a nursing infant. In addition, drinking a large amount may cause neural tube birth defect in babies.

The tannins in green tea may block nutrients absorption such as protein and fats in children. It may also lead to overstimulation because of the caffeine present in green tea.

Green tea must not be taken along with these medications as it is known to cause negative reactions:

How to Consume Green Tea?

The United Kingdom Tea Council recommends drinking not more than 6 cups of tea a day. For the best health benefits, 3 to 4 cups is recommended. However, doses of green tea vary significantly, but usually range between 1-5 cups daily is considered safe. The commonly used dose of green tea is based on the amount typically consumed in Asian countries, which is about 3 cups per day, providing 240-320 mg of the active ingredients, polyphenols. To make tea, people typically use 1 tsp of tea leaves in 8 ounces of boiling water.

Drink green tea when it’s freshly made but slightly cooled. Scalding tea can damage your digestive system. Moreover, recent studies suggest that too much hot tea can promote throat cancer. Compounds in tea like catechins, theanine, and vitamins C and B diminish over time through oxidation, so the health benefits are strongest with fresh tea. If you’re brewing the same tea leaves, brew them in moderation. With each successive infusion, cancerous substances in the leaves themselves (often pesticides) are drawn out and can even be toxic. Old tea can also harbour bacteria, especially since its antibacterial properties diminish with time.

You don’t have to quit drinking your favourite cup of green tea, but if you have any of the above mentioned medical conditions or taking prescription drugs, exercise caution and consult your doctor about how many cups you can have per day. Moderation is the key to enjoying the full benefits of green tea.

A Silent Love, One Of The Most Touchy Love Story You’ll Ever Read

SINGLE OR MARRIED YOU MUST IMMEDIATELY READ THIS… IT WILL SHOCK YOU FOR SURE!