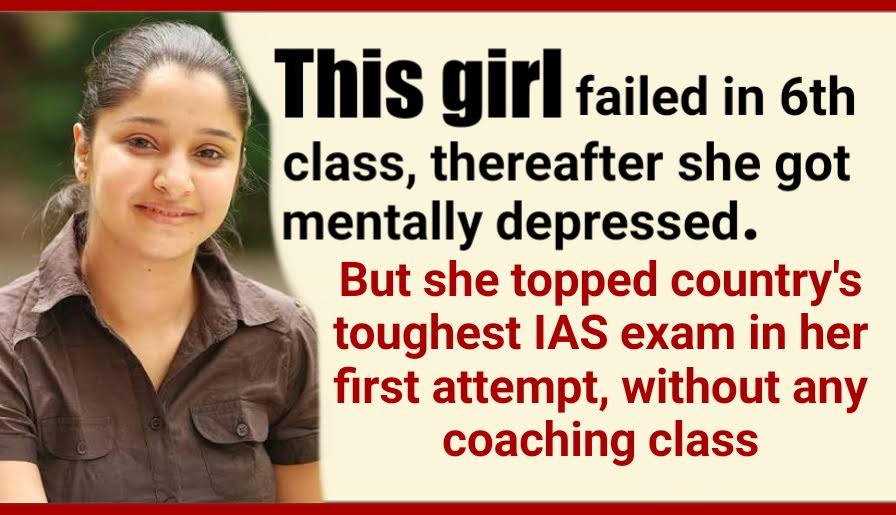 “Go for it. If I Can do it, everybody else can, and nothing can stop you”—Rukmani Riar

Board Exam Results have been announced for class X and class XII for the current academic year. Many schools are reopening shortly. Students who have come up with flying colors in exams are aspiring for much more accomplishments. Whereas students who have failed in exams are depressed and suicidal tendency amongst youngsters has become a serious social issue.

No matter in whatever manner we pacify— the deep-rooted wound caused amongst youngsters by failure is not easy to get rid of. Here is a story of 2nd Rank bagger in Indian Administrative Service (IAS) Exams of 2011 batch—Rukmani Riar, who took up her failure in 6th standard so deeply to heart, that it was her life’s first and last failure in academics. From there on she has taken the path of perseverance to bag two honors degree in social sciences, a Gold medal in Post graduation and to ice the cake, has cleared I.A.S exams by ranking second in 2011 batch of aspirants.  Here is a brief bio of this young I.A.S officer to motivate all youngsters keen on achieving their dreams.

Rukmani Riar was born in a well to do family as the only daughter of Mr. Baljinder Singh Riar, District Deputy Attorney of Hoshiarpur, in Haryana and Mrs. Takdeer Kaur a homemaker. Rukmani did her schooling at a boarding school called Sacred Heart School at Dalhousie, Himachal Pradesh.  Rukmani’s failure in class VI Exams deeply hurt her conscious, and from thereon she has not given a reason for failure. She has attributed ‘Perseverance’ as the key to her success.

Rukmani has revealed in most of the interviews that she prefers self-study and has cleared all her exams without any special coaching classes. She graduated from Guru Nanak Dev University in Amritsar and completed her Post graduation in social sciences with a gold medal at Tata Institute of Social Sciences, Mumbai.  As Rukmani was very much focused on joining administrative services she had chosen Social Sciences as her field of study. Most interesting aspect of her education is she has succeeded in cracking all competitive exams in the first attempt. She attributes this success to the lesson learned from her failure in class VI. She opines, failure always scares us. As a result, she prepares thoroughly to avoid such embarrassments.

Rukmani is a multifaceted personality, who is a prolific reader and writer. She has penned many poems, and her social concern is reflected in all her works. Two of her works—‘Struggle with Reality Women and her Working Condition’ and ‘Skewed Sex Ratio in India: A cause for immediate concern’ clearly depicts her concern for society.

Rukmani is not only career oriented personality. She has an aspiration to serve the society with power or without power. This attitude is seen in her association with various NGOs operating in Karnataka and Maharashtra states. She has actively participated in various social activities that through light on social problems of our Nation.

In spite of all her achievements, she doesn’t like to keep her success mantra as a secret entity. In an interview with IBM Live Media, Rukmani Riar has said:  “My hard work has paid off and I am very happy. I credit my parents, teachers, friends, and above all God for the success. My message to aspiring candidates is that consistency, hard work, and persistence is the key to success. Go for it. If I can do it, everybody else can, and nothing can stop you.”

REVERSE CAVITIES AND HEAL TOOTH DECAY WITH THESE 4 EASY STEPS!

SAD REALITY OF OUR WORLD DRAWING WITH OIL PASTELS

5 OF THE MOST AMAZINGLY BEAUTIFUL COLLEGE CAMPUSES IN INDIA