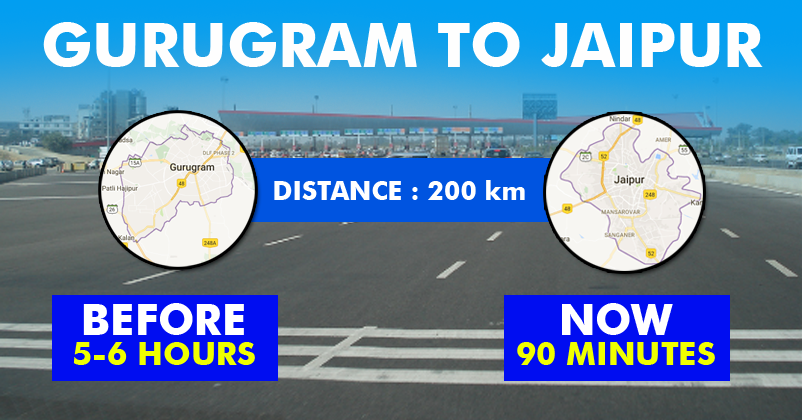 Gone are those days when you had to worry about “Distance” and “Time” while travelling. With the introduction of new highways and expressways, things have become easier for commuters.

Residents of Delhi have a reason to rejoice; now, they will be able to reach Jaipur in just 90 minutes. Yes, you heard it right!

A new “SUPER EXPRESSWAY” between Gurugram to Jaipur has been proposed, and work will start soon. We must thank Nitin Gadkari for this.

Gadkari claims that this super highway will considerably reduce the time of the travelers. Usually, it takes around 5-6 hours to travel from Gurugram to Jaipur, but with this expressway, it will take just 90 minutes.

The distance between Delhi and Jaipur is 260 km, but since this expressway will be connected to the outskirts of Gurugram and Jaipur, the total stretch will be just 200 kms. The maximum speed limit set for expressways is 100kmph, but for this one, the speed limit will be modified. We all know that it is not at all possible to cover 200 kms in 90 minutes at the speed of 100kmph and hence, the modified speed limit will be around 130-140kmph.

“We will revise the maximum speed limit. The proposed expressway will take off from the outskirts of Gurgaon and join Jaipur Ring Road (on the outer periphery of the city). We expect this total stretch to be around 200 km. Since it will be access controlled, one can maintain high speed all along the expressway.”

Last year in the month of March, Gadkari had promised that the speed limit would be enhanced and people will get permission to drive at the speed of around 140 kmph on such expressways.

Such “Super expressways” are indeed a blessing! What’s your take on this? Do share your views in our comments section below.

THE FIRST WEEK VS LAST WEEK: THIS IS A MUST WATCH VIDEO FOR NEWLY WED COUPLES!