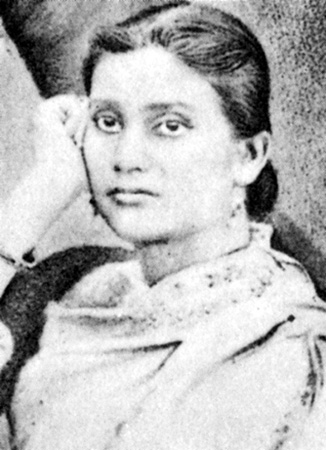 “Woman must not accept; she must challenge. She must not be awed by that which has been built up around her; she must reverence that woman in her which struggles for expression.” –Margaret Sanger

Credited as one of the earliest female medical practitioners of the pre-partition India, Kadambini Ganguly, born Kadambini Bose, broke the tradition when she became one of the first two ladies from the British India to graduate. Later, she also went to be the leading woman in South Asian to study Medicine.

Originally from Changi, in Barisal (now in Bangladesh), Kadambini was born in Bhagalpur, British India. She belonged to a family that had been influenced by Bengali Renaissance. Her father, Braja Kishore Basu, was a renowned proponent of Brahmo Samaj, the Hindu reformation movement of the early 19th century. Basu, a headmaster by profession, also worked for women’s emancipation and co-founded a women’s organization Bhagalpur Mahila Samiti in 1863, the first of its kind in India.

Kadambini’s formal education began at Banga Mahila Vidyalaya, which was the earliest liberal arts college for women in India. Later, it amalgamated with Bethune School. Kadambini continued her academic journey in Bethune School. The first candidate from Bethune School to appear in the Entrance Examination of the University of Calcutta., she achieved a historic feat by also becoming the first woman to pass the University of Calcutta entrance test in 1878. Her remarkable achievement was a major reason that prompted Bethune College to introduce FA (First Arts) and then graduation courses in 1883. Kadambini was one of the first two graduates from Bethune College, and also in the entire British Raj.

Afterward, Kadambini went to pursue Medical Science at the Calcutta Medical College. In 1886, she got a GBMC (Graduate of Bengal Medical College) degree, which eventually permitted her to practice. Here too she made a record by becoming one of the two, Anandi Gopal Joshi being the other, Indian women physician eligible to practice western medicine.

The unprecedented feats of Kadambini, instead of applause, brought to her hostility from some orthodox sections of the society. However, this lady incredibly confident and determined woman never failed to assert her individuality and was least intimidated by a patriarchal society who sought women to follow dictated terms. Defying all odds, Kadambini left for the United Kingdom in 1892 to get some more experience in her field. There, she received various certificates from Edinburgh, Glasgow, and Dublin. After her return to India, Kadambini worked for a short period in Lady Dufferin Hospital. Later, she started her private practice.

It was not only her academics and profession that earned a name for her. Being a radical lady of her era, Kadambini used to take part in mainstream progressive movements. For the cause of women, Kadambini worked along with her husband, Dwarkanath Ganguly, the prominent Brahmo Samaj leader and reformer. Kadambini was instrumental in the social movement that sought to improve conditions of female coal miners in the Eastern India. When the Indian National Congress saw its first female delegation in its 5thsession, Kadambini was also a part of it. After the Partition of Bengal, in 1906, Kadambini also organized the Women’s Conference in Calcutta. In a 1908 Calcutta meeting, for expressing sympathy with Satyagraha, Kadambini served as the president. She formed a group to collect money with the aid of fundraisers to support the workers.

This coming-of-an-age life story of a lady who broke the prevalent concepts of an ideal Indian Woman and set her rules by herself is something we should look up to time and again. Along with so many feathers of ‘first’ in her cap, Kadambini Ganguly was most possibly one of the earliest working ladies of modern India, who meticulously played her roles both inside and outside of her home. At a time when the ‘purdah’ was the custom, women were not meant to be highly educated or professionals, marriage was to be the only aspiration of a lady, Kadambini was one of the brave women who faced every such difficulty and shattered all the stereotypical notions of a woman. Indeed, it was the women like Kadambini Ganguly who paved the way for the generations to come.

AAMIR KHAN EARNED A HUGE SUM FROM DANGAL! YOU’LL BE SURPRISED TO KNOW THE AMOUNT!