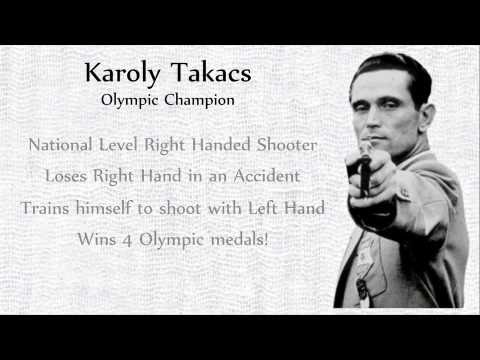 Karoly Takacs of the Hungarian Army, was top pistol shooter in the world for men’s 25 metre rapid fire pistol. He had won many national and international championship in shooting. He was preparing for Olympics 1940 and was expected to win Gold for his nation.

But one day in 1938 during his army session a hand grade exploded in his right hand, his shooting hand and  with the lost of his hand he also lost his dream of winning Gold in Olympics.

He spend a month in hospital recovering. He decided that he is not gonna feel pity and held onto his Olympics dream. He figured that he had a fully functional and healthy Left arm. He chose to explore the world of possibilities.

Karoly had will to succeed. He decided to practice shooting with his left hand. Despite the fact that he was not left-handed, he was determined to make his left hand the best shooting hand in world.

For months he practiced by himself and decided not to tell anyone.

In 1939, he showed up at National Pistol Shooting Championship. There other shooter approached him to give condolences and to congratulated him to have a strength to come and watch other in shooting championship.

Karoly replied, “I didn’t come here to watch. I came to compete.” Everyone was surprised to know that and what surprised people even more was the fact that he won that championship with his left hand.

Moral:
To Achieve anything Worthy in Life one needs Attitude and Will. Skills and techniques can be learned, can be taught but not will. We need to Work toward our Goal with full Determination to Succeed.