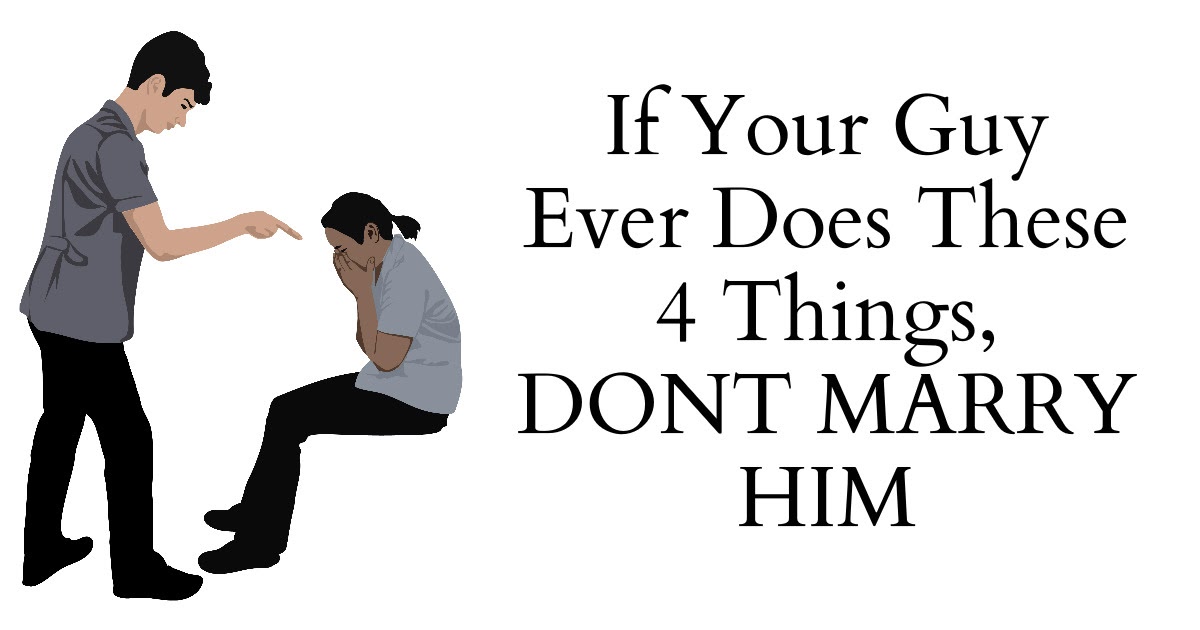 The concept that a loving relationship between partners should be all about love and respect should never be forgotten. There are an abundance of truly healthy relationships where both partners communicate, show respect and affection, and work hard to keep the relationship in good-standing.

Unfortunately, there are also an abundance of relationships that look nothing like the aforementioned relationship. Even more distressing is that many of these destructive relationships evolved despite early signs of dysfunction. For women, these signs should be deal breakers that scream “Don’t Marry Him!”. The four biggest deal breaker should be:

Temper and Violence – Violence doesn’t have to become physical to set off alarms. If a man is prone to excessive verbal outbursts and physical actions such as destroying property, it might be nothing more than a matter of time before that violence is turned towards his partner in the form of physical abuse. Worse of all, temper and violence tend to escalate and can’t be easily fixed without counseling.

Infidelity – “Once a cheater, always a cheater”. Once a person has shown the willingness to cross the line, that willingness will always exist. If your man has a history of infidelity in prior relationships or cheats early within the existing one, the necessary love and respect are not present and it is only going to get worse. Relationships can only grow if people take them one at a time.

Addiction – Drug abuse, alcoholism, sex addiction and compulsive gambling are all highly destructive behavioral problems that tend to take down anything in its path. Far too many women feel compelled to “save” the addict from himself. The reality is that most addicts need intensive counseling and support just to gain and ounce of abstinence and, women are ill-prepared to “fix” a sick addict.

Possessive Behavior – If a man exhibits signs of extreme jealousy and ownership over his partner, he is most likely suffering from issues of low self-esteem and little confidence. A mentally healthy man understands a woman’s need for social interaction and won’t get in the way. Unfortunately, possessive behavior often leads to rage and violence.
If your partner exhibits any of these signs, your best option is to move on and find the healthy relationship you deserve. Don’t fall victim to your need to nurture and rescue a damaged man. The right man will be the one who has already focused on his issues to become the man you really want and need.

IF YOU HAVE THESE ‘TWO HOLES’ IN YOUR LOWER BACK, WE HAVE GREAT NEWS FOR YOUR SEX LIFE

SEE WHAT YOUR BIRTH MONTH SAYS ABOUT YOUR PERSONALITY