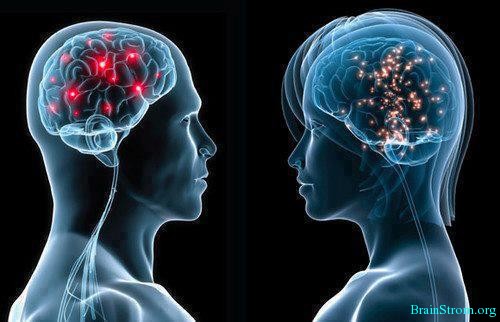 1. MULTI-TASKING
Women – Multiple process
Womens brains designed to concentrate multiple task at a time.
Women can Watch a TV and Talk over phone and cook.
Men – Single Process
Mens brains designed to concentrate only one work at a time. Men can not watch TV and talk over the phone at the same time. they stop the TV while Talking. They can either watch TV or talk over the phone or cook.

2. LANGUAGE
Women can easily learn many languages. But can not find solutions to problems. Men can not easily learn languages, they can easily solve problems. That’s why in average a 3 years old girl has three times higher vocabulary than a 3 yeard old boy.

3. ANALYTICAL SKILLS
Mens brains has a lot of space for handling the analytical process. They can analyze and find the solution for a process and design a map of a building easily. But If a complex map is viewed by women, they can not understand it. Women can not understand the details of a map easily, For them it is just a dump of lines on a paper.

4. CAR DRIVING.
While driving a car, mans analytical spaces are used in his brain. He can drive a car fastly. If he sees an object at long distance, immediately his brain classifies the object (bus or van or car) direction and speed of the object and he drives accordingly. Where woman take a long time to recognize the object direction/ speed. Mans single process mind stops the audio in the car (if any), then concentrates only on driving.

5. LYING
When men lie to women face to face, they get caught easily. Womans super natural brain observes facial expression 70%, body language 20% and words coming from the mouth 10%. Mens brain does not have this. Women easily lie to men face to face.
So guys, do not lie face to face.

6. PROBLEMS SOLVING
If a man have a lot of problems, his brain clearly classifies the problems and puts them in individual rooms in the brain and then finds the solution one by one. You can see many guys looking at the sky for a long time. If a woman has a lot of problems, her brain can not classify the problems. she wants some one to hear that. After telling everything to a person she goes happily to bed. She does not worry about the problems being solved or not.

7. WHAT THEY WANT
Men want status, success, solutions, big process, etc… But Women want relationship, friends, family, etc…
8. UNHAPPINESS
If women are unhappy with their relations, they can not concentrate on their work. If men are unhappy with their work, they can not concentrate on the relations.
9. SPEECH
Women use indirect language in speech. But Men use direct language.
10. HANDLING EMOTION
Women talk a lot without thinking. Men act a lot without thinking
previous post

HOLDING YOUR HAND IN THIS POSITION DOES SOMETHING INCREDIBLE FOR YOUR BODY, HERE’S HOW

The 30-Day Squat Challenge That Will Totally Transform Your Body

MOTIVATIONAL QUOTES|WHATEVER YOU ARE, BE A GOOD ONE.