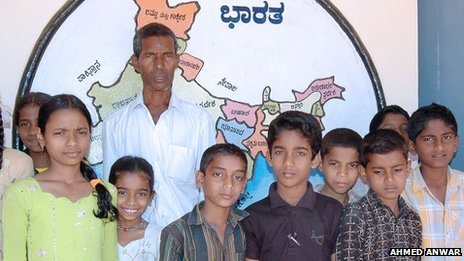 A hero is someone who has given his or her life to something bigger than oneself. –Joseph Campbell

Harekala Hajabba from Karnataka is one such hero. Selling oranges in the South Indian city of Mangalore, Hajabba has established a school with his savings. Involved in a profession that hardly secures one’s daily needs, Hajabba has shown that it does not need to be a millionaire to do something good. The fruit-vendor-turned-social reformer’s effort to provide education to the children of his village is a most commendable feat.

Hajabba was born in the impoverished rural area of New Papdu.

Hailing from a poor background, Hajabba was forced into rolling ‘beedis’, the mini-cigarette famous in the rural folks of South-East Asia. When a flood destroyed his hut, Hajabba moved to Mangalore and started selling oranges from the money he had saved by rolling beedis.

Forced into labor from a very early age, Hajabba never got a chance to learn. Also, the life of an orange-seller was no better than that of a beedi-roller. Hardships and humiliation that he suffered all through his life made him realize the importance of education and literacy. He was illiterate, but he did not want to see one more from his village to suffer the utmost hardships of life due to lack of proper education.

With an aim to get a school for his village, Hajabba started saving whatever he could from his small earning as a hawker. After much effort, in 1999, Hajabba’s dream took shape in the form of a small school attached to a mosque in his village. Earlier, there were only a few students. However, as the number of students increased, Hajabba thought to shift the school to a bigger facility. So, he continued to accumulate every bit he earned towards building a proper school and ensuring the education of the poor children.

In 2004, Hajabba bought a small land for the school. However, sooner he came to realize that to build a school would need way more than what he had at his disposal. So Hajabba started approaching people for money. From political leaders to elites, he begged before everyone he found access to. But, nothing much came of his attempts to seek help from others. Many would refuse him at once; some would treat even harshly. It was a most desperate time.

Following such a terrible experience, most of us would have left the idea and returned to our daily life. But this man, Hajabba, was no ordinary soul that would be disheartened even by such appalling and apathetic responses. The reluctance of so many people to support him didn’t come in the way of his ambition.

After dedicatedly striving for a long time, saving from his small income and collecting little funds from his customers and after toiling through one government bench to other, he finally saw the foundation of the ‘Dakshina Kannada Zilla Panchayat Higher Primary School’ in 2004.

The School – At Present

In its earlier days, the school had a few students and some four teachers. Sooner, it got a Head Master too. Around 150 students are now studying there. Started as a primary school, it has now evolved into a secondary school standing on more than 1 acre of land area.

Harekala Hajabba is widely praised for the revolutionary work in rural education within his state. He used his small savings to start a school in the deprived area he belonged to so that the children there could get a primary education. The school, which has grown with state aids and donations from individuals, is locally famed as ‘Hajabba School’, in respect of its founder. Locals affectionately call him ‘ Akshara Santa,’ meaning ‘the saint of letters.’

Social activist and author, Ismath Pajeer has published a biographical work on Hajabba’s life and struggle.

In a show of admiration, Mangalore University has included in its revised syllabus the life story of Hajabba, to inspire its pupils.

The media, both domestic and international, has paid Hajabba much tribute by publishing several articles on his marvelous endeavor to build a school for village children.

Still working as a street hawker, Hajabba is now on a new mission. That is to get a college for the villagers. As there is no college near the village, and most of the students cannot bear the expense of going to the city for higher studies, particularly the girls. Seeing this, Hajabba is in talks with the several officials to establish a college so that the aspiring youngsters of his village can study further and make a career for themselves.
We bow to the indomitable spirit of Harekala Hajabba!

LIVE LIFE WHILE YOU CAN