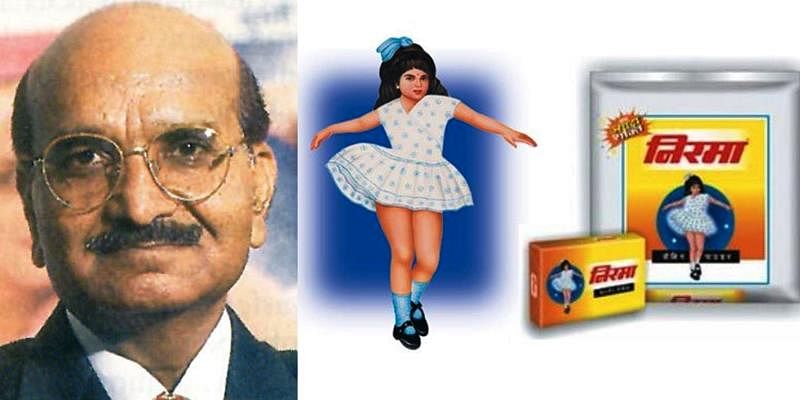 Karsanbhai had lost his daughter in a car accident and went on to immortalise her name in a brand he has been nurturing like his own daughter. Today, Sabki Pasand Nirma is the most famous brand that that goes beyond lip service.

It was during the year 1969, when Nirma project was started, at that time there were very few players in India’s domestic  detergent market.  Most  of the companies at that time were targeting only India’s affluent.

Karsanbhai begin producing detergent powder in the backyard of his house in Khokra near Ahmedabad. Initially they started to sell it from door to door at Rs 3 per Kg, where as the other competitors were selling for the price of Rs 13 per Kg.

Karsanbhai is mostly known for his brilliant and famous marketing strategies in 1980. One of his most shocking move, during the time when Nirma was struggling was to empty Nirma’s stock from all stores! Which as then backed by an aggressive wide scale marketing. After which people started to demand for Nirma, That is when he gushed in with detergent’s supply making a bumper sale.

The product Karsanbhai once sold from door to door, today has an overall 20% market share in soap cakes and about 35% in detergents. Karsanbhai Khodidas Patel (born 1945, Ruppur, Mehsana, Gujarat) is an Indian industrialist, founder of the Rs. 2500 crore (USD 500 mn) Nirma group with major interests in detergents, soaps and cosmetics. In 2005 Forbes listed his net worth as USD $640 million.

WHAT THE SHAPE OF YOUR BELLY BUTTON SAYS ABOUT YOUR HEALTH

DON’T UNDERESTIMATE ANYONE BECAUSE EVERYONE HAS A DIFFERENT STORY