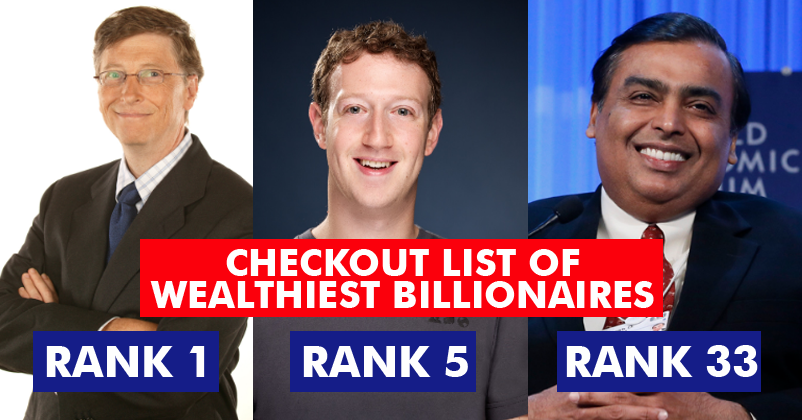 Forbes Magazine has updated the list of world’s richest billionaires and has some surprising additions to the latest update. Bill Gates, the Microsoft owner, continues to be the world’s richest man with an estimated wealth of around $86 billion. However, the most sensational name in the list remains to be of Facebook’s founder Mark Zuckerberg, who is the youngest amongst the top 10 billionaires aged just 32

Charles Koch and David Koch are the other notable names in the top 10. They are both brothers who run the Koch Industries. They both together have made Koch Industries arguably the largest privately held company in terms of revenue.

HERE IS THE FULL LIST OF THE TOP 10 BILLIONAIRES OF THE WORLD ALONG WITH THEIR ESTIMATED NET WORTH.

India too has quite a few achievements to be proud of. India has the world’s fourth highest number of billionaires and is home to 101 billionaires. The list of Indian billionaires is topped by Reliance Industries chief Mukesh Ambani with a net worth of $23.2 billion. The list also includes four Indian women.

HERE IS THE FULL LIST OF THE TOP 10 RICHEST INDIANS LISTED AS PER THEIR GLOBAL RANK!

There have been many new comers from India with the Paytm and Patanjali Ayurveda owners leading the list. Demonetisation has been the biggest game changer for India billionaires.

The list yet again proves that the world is after technology with most of the world’s top billionaires earning mainly through Internet. Do let us know your views about this list of world’s billionaires in our comments section below.

WHAT DOES YOUR FOOT SHAPE SAYS ABOUT YOU?

FROM EARNING RS 150 A MONTH TO RUNNING A RS 30 CRORE BUSINESS, HERE’S THE STORY OF PREM GANAPATHY’S DOSA PLAZA

7 Things Never To Do When Relationships End