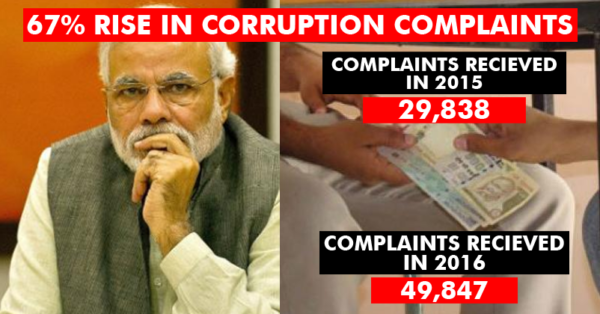 One of the greatest achievement of NDA government as claimed by Prime Minister Modi is that no scam has taken place in his government. But the reports from CVC Central Vigilance Commission says the opposite. The repports reveals an increase in corruption in the government departments. Large number of complaints have been received against the employees working in the offices of central government and state government departments.

“The Commission received a considerable number of complaints against public servants working in the state governments and other organisations who do not come under the jurisdiction of the Commission or which are of administrative nature.”

The number of  corruption complaints for last few years was also mentioned in the reports which were !

Well the leading department against which 11,200 complaints were received is Railways.  Out of 11,200 complaints 8,825 have been solved yet while the rest 2,348 are unsolved.  And out of these unsolved, 1054 are in a pending state since 6 months.

Surprisingly, the number of complaints received against the departments which are located in the NCR has reduced to 969 in 2016 from 5,139 in 2015. We would like to remind you that the present Chief Minister of New Delhi, Arvind Kejriwal, has constantly been accused of corruption and using tax payers’ money for his personal use but this reduction in the number of complaints in his region suggests that he has been working towards eradicating corruption.

As far as other departments are concerned, below is the data:

Who is reducing the corruption, PM Modi or Arvind Kejriwal? What is your opinion regarding it? Share your views in the comments section below.

COOL PICTURES THAT WILL MAKE YOUR DAY

6 SCIENTIFIC REASONS WHY INDIAN TOILETS ARE BETTER THAN WESTERN ONES

Unbeliavable Transformations Of Indian Actors For Their Roles