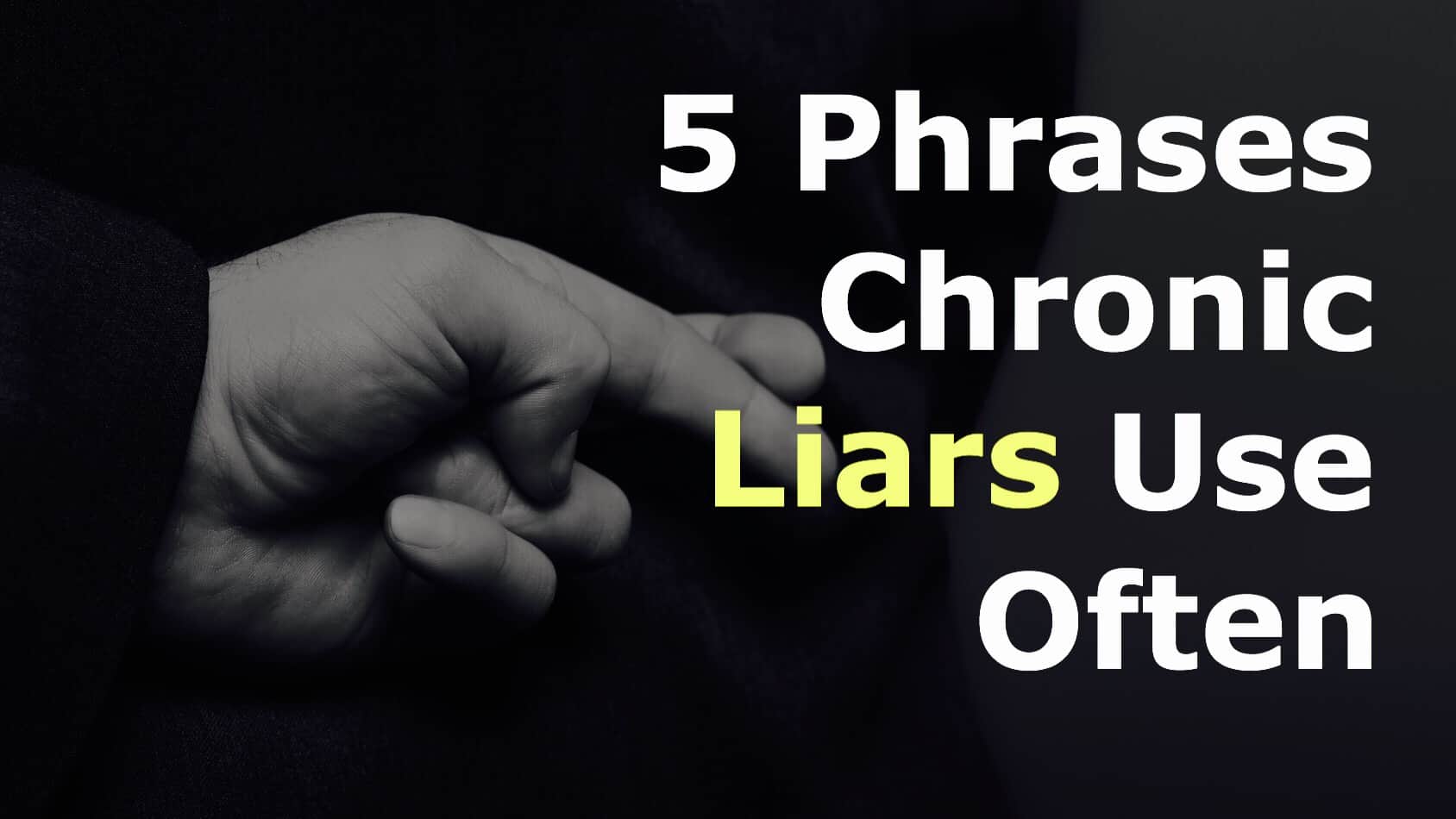 Chronic liars will try to say certain phrases that are giveaways to their deceit, and if you are armed with this list of 5 common phrases that liars use, you won’t fall prey to believing them. None of us tell the truth 100% of the time, but white lies to save someone from having hurt feelings are one thing; deception with the intent to conceal important information is another.

The police have the benefit of lie detectors and detectives who are trained to recognize the telltale signs of deception. You, on the other hand, are less well-equipped to know when someone is trying to make a fool out of you, but you can look for these signs in the language that you hear from the person you suspect of lying.

5 PHRASES LIARS USE TO MAKE YOU BELIEVE THEM

Lies can lead to broken relationships, broken trust, and even financial losses when we put our faith in the wrong kind of person. But how do you know the liars from the honest people? Protect yourself from being deceived by knowing these 5 common phrases and strategies that liars will try to make you believe them.

1. HONESTLY/TO TELL YOU THE TRUTH

Well, we would hope they would always be telling the truth but a liar will try saying, ‘To be quite honest with you’ as support for a story that is clearly a lie whereas people who don’t feel defensive don’t feel the need to say this.

Liars have to memorize the details of their false story so that they won’t get caught in a lie. They will often tell you way too much detail as a result of trying to make their story seem realistic and cover their tracks.

For example, a liar will try saying ‘It was exactly 8:15am when I looked out the window and saw the car was missing from the driveway.’ Very few people would know the exact time that they looked out the window, or would think to check the clock as their first reaction so this additional detail is a giveaway of a story concocted by a liar.

Absolute words like ‘never’ and ‘always’ are almost always false, because we rarely always or never do anything the same way in our behavior. A liar will try to add these words to their conversation to make them seem reliable to you.

Avoiding ownership and accountability is what is happening when liars try to explain themselves and they hope you will believe them. As a result, they use the personal pronoun ‘I’ less often as they tell their tale. According to the American Psychological Association, a study of lie detection by the University of Texas at Austin looked at written statements and could predict lies by looking for these 3 types of phrases that liars use to get you to believe them:

* Less use of words that are exceptions, like ‘but’ or ‘except’

* Less use of ‘I’ statements

The researchers were able to develop a software program that analyzes writing for these phrases that liars use differently and were able to detect lies with 67% accuracy, which was better than a human judge of lies who was only accurate 52% of the time.

Researchers at the Department of Communication at Michigan State University studied how often the typical American lies in a day. They conducted a national survey of 1,000 U.S. adults and asked them to report the number of lies told in a 24-hour time period. The results were that ‘Sixty percent of subjects report telling no lies at all, and almost half of all lies are told by only 5% of subjects.’ So 40% of the population are liars, but most reported lies are told by a few people who lie a lot more often than others.

When asked about their story, a liar will automatically deny any wrongdoing, even if they weren’t accused of it yet. A liar will also try saying why they acted a certain way, even if you did not ask them for the reason. This is to give a justification for their behavior and because they are feeling guilty. Liars will also speak in short sentence fragments that don’t give a complete answer because they are trying not to reveal too much of what really happened.

* Sustained eye contact without looking away while they speak

* Feet pointed toward the door or away from you.

12 HABITS OF UNHAPPY PEOPLE YOU NEED TO AVOID

25 SECRET SIGNS HE’S CONFESSING HIS LOVE FOR YOU