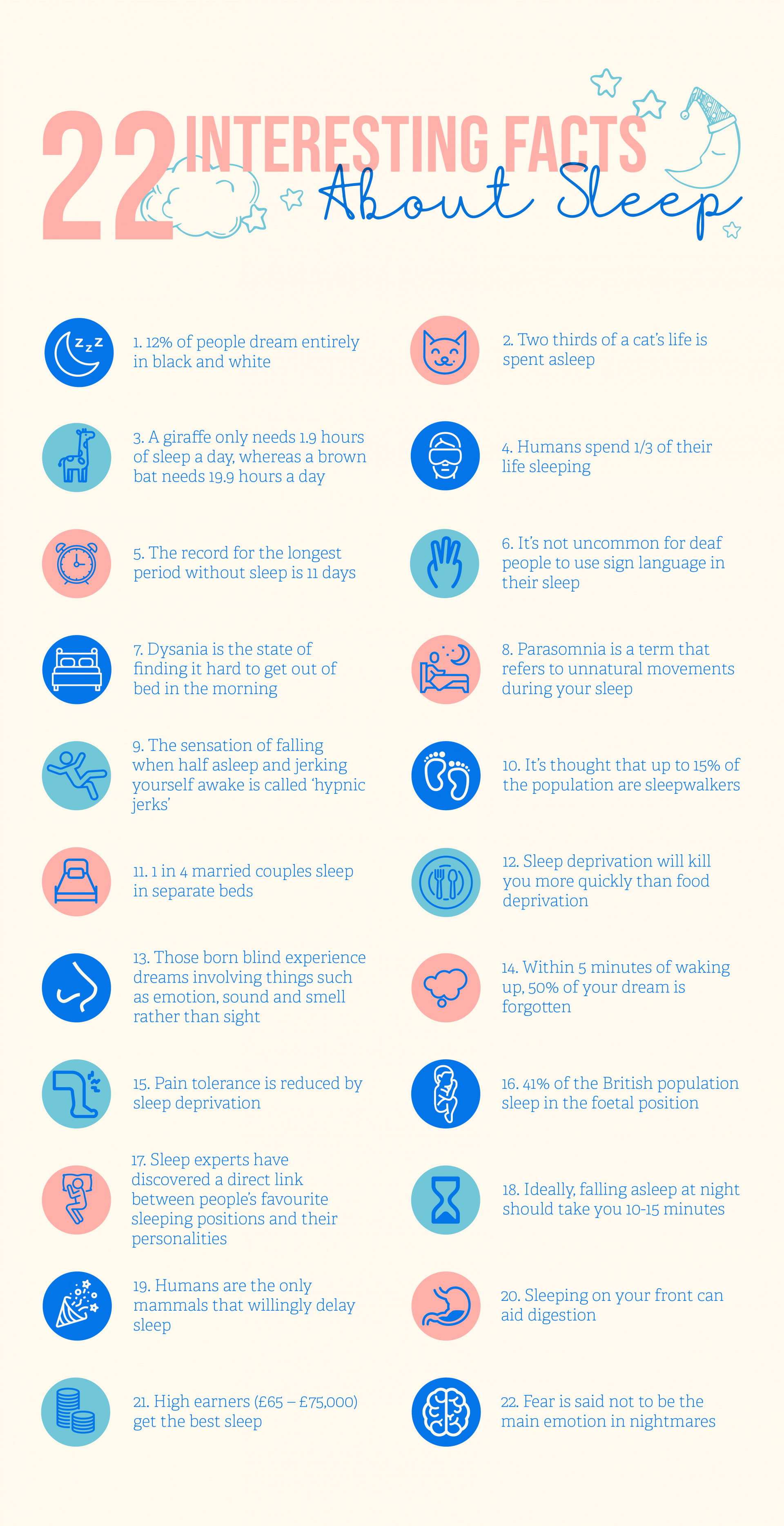 Everybody loves Sleeping but can anyone define the exact reason why we sleep? No you can’t. Don’t worry, experts and scientists are still blank today when it comes to sleeping reason. It has always been concluded that Sleeping is a natural periodic state of rest for the mind and body, in which the eyes are usually close and consciousness is completely or partially lost, so that there is a decrease in bodily movement and responsiveness to external stimuli”

Well, actually sleeping in basic is a way to re-energize the body after working, staying awake and doing some activities in the day.

Apart from this, do you know that there are few strange Sleeping Facts that you don’t know? lets see the facts starting with..

Most People can Survive for up to 2 Months without Eating, but people can only Live up to 11 days without sleeping.

Around the time of full moon, brain activity related to deep sleep dropped by 30% and we take 5 minutes longer to sleep than what we would have done on normal daysFull moon night

The Giraffe has one of the shortest sleep requirements of any mammals, which is between 10 minutes and 2 hours in a 24-hour period, averaging 1.9 hours per day.

People whose normal nighty sleep duration is either unusually short (less than 4 hours) or unusually long (more than 9 or 10 hours) have a higher than average risk of dying prematurely.

Koalas are the longest-sleeping mammals sleeping about 19 to 22 hours a day mainly because their diet is so energy poor.

Alcohol has a direct depressant effect on the tongue and other muscles in the throat, which narrows the upper airway space and make your snoring worse.

Sleeping at work is so common in Japan, as it’s viewed as Exhaustion from working hard and they have defined certain Rules for sleeping during work.

Dolphins are capable of UniHemispheric sleep, in which one hemisphere of the brain goes into a deep sleep while other hemisphere remains awake which allows them to sleep under water without drowning.

The record for the longest period without sleep is 18 days, 21 hours, 40 minutes during a rocking chair marathon. The record holder reported hallucinations, paranoia, blurred vision, slurred speech and memory and concentration lapses.

“Believing you’ve slept well, even if you haven’t, improves performance.”

DISCOVER WHAT YOUR PALM REVEALS ABOUT YOUR PERSONALITY

If music gives you goosebumps, your brain might be special

15 ABSOLUTELY ASTOUNDING FACTS YOU CAN BARELY BELIEVE ARE TRUE