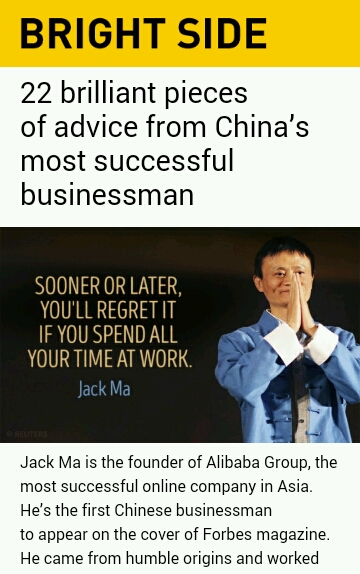 ack Ma is the founder of Alibaba Group, the most successful online company in Asia. He’s the first Chinese businessman to appear on the cover of Forbes magazine. He came from humble origins and worked in many different professions, and therefore has had his fair share of ups and downs, successes and failures. But he never gave up.

We thought we’d share some of Ma’s best pieces of advice — not just for those who want to be successful in the professional lives, but in life in general.

ON WHAT NOT TO DO

ON LIVING LIFE TO THE FULL

ON COMPETITION AND COMPETITORS

ON SETTING UP YOUR OWN BUSINESS

THIS 21-YEAR-OLD DELHI BOY WAS OFFERED AN INSANE SALARY OF RS 1.25 CRORE BY UBER