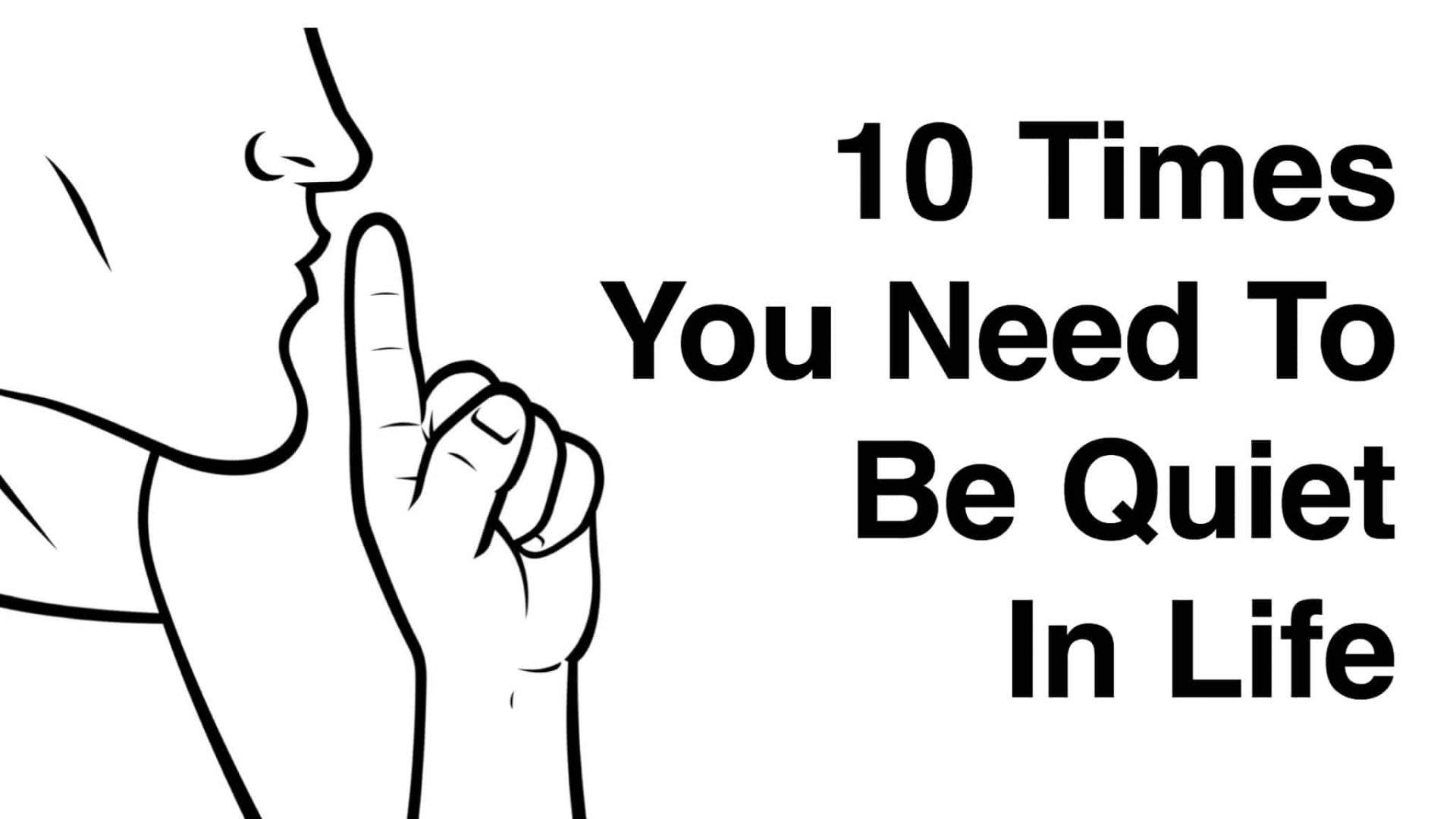 In our personal lives, we needn’t be a politician or other prominent figure to recognize the time and place for quiet.

Here are ten times we’d do well to be quiet in life:

1. WHEN YOU DON’T HAVE THE NECESSARY FACTS

Harlan Ellison, one of history’s most prolific writers, once said “You are not entitled to your opinion. You are entitled to your informed opinion. No one is entitled to be ignorant.” You may or may not agree with Ellison’s sentiment, but speaking about a topic of which you have no facts or evidence may well be perceived as absentmindedness.
If it’s a sensitive issue, we’d do well to hold our tongue until we know all the facts.

2. WHEN YOU HAVE A FEELING THE WORDS WILL HURT

In the midst of a heated discussion, most (all?) of us have said something that unfairly hurt someone else. Being honest with ourselves, we felt the aftereffects of the words before they were said. In other words, we knew the sting that those words would produce – and said them anyway.
When tempers are high, our talk-to-quiet ratio should be low. Speaking of which…

3. WHEN YOU HAVE A SENSE YOU’LL BE ASHAMED

#2 and #3 are often inclusive. When we replace coolness and logic with hotheadedness and impulsivity, the changes of us hurting someone else and ourselves skyrockets.
Feeling ashamed of something that shouldn’t have ever been said isn’t worth it.

4. WHEN IT’S NOT OUR PLACE TO SPEAK

The truth is that focused, fully attentive listening (i.e. active listening) is rare. Too many people would rather be heard than hear – and this is something that can kick us in the rear in every part of life.
Understanding and being skilled in active listening can lead to new insights, expand knowledge, and improve our relationships.

5. WHEN WE HAVE NOTHING TO SAY

It’s ironic that “uncomfortable silence” is unbearable, but small talk is a social skill. Chatter among friends is nice, but why should we feel obliged to say something when there is nothing?
(Silence)

6. WHEN YOU’RE BEING TAUNTED

7. WHEN YOU’RE TRYING TO CHANGE A RELATED BEHAVIOR

Understanding and making an attempt to break a bad habit is a noble act. Changing our behavior can also be quite difficult at times. Habits often repeat themselves because we don’t actively watch and intervene.
When it comes to changing how we speak to ourselves and others, an influx of conflicting thoughts and feelings will arise. It is important to remain silent until we’re able to regain control.

8. WHEN YOUR NEGATIVE EMOTIONS ARE HIGH

9. WHEN YOU COULD BE DOING SOMETHING PRODUCTIVE

Why are you chattering 100 words a second about nothing-in-particular when you could more wisely invest this time? Unsurprisingly, engaging in a random conversation is a common means of avoiding responsibilities.
What could you be doing instead that will better your life?

10. WHEN YOUR WORDS WILL POORLY REFLECT ON SOMEONE

Speaking about someone with intent to inflict harm upon their character is a foolish act. It’s a no-win situation. This is particularly the case when this “someone” is a spouse, relative, friend, or colleague.
previous post

6 Management Lessons That Everyone Should Know. #2 Is Priceless

20 Before And Afters To Know Power Of Makeup Transformation