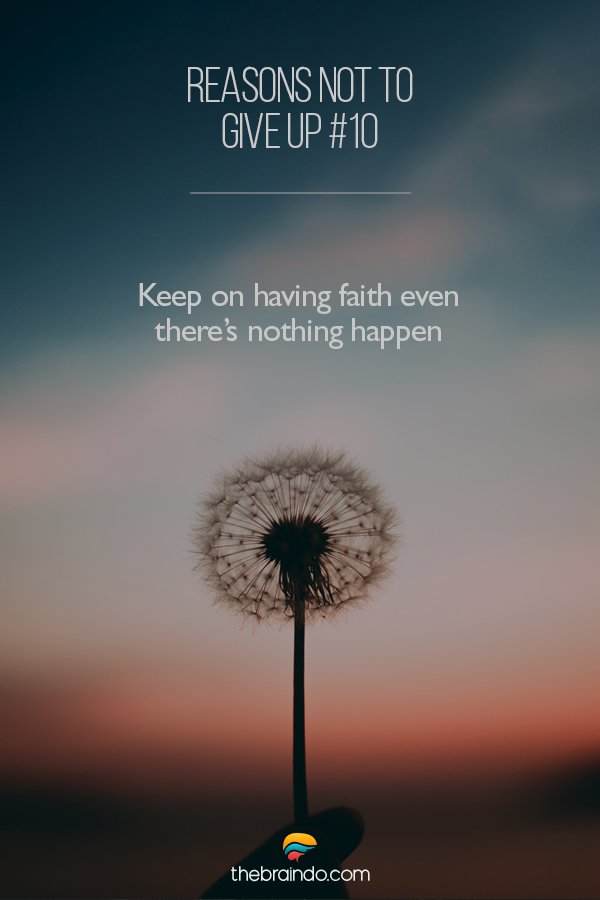 Some of the greatest athletes, entrepreneurs and minds are people no one knows about because at one point they gave up.  The process of going from being an under achiever to over achiever is extremely painful, challenging, and annoying but the final product is priceless.

Here are 10 reasons why you should never give up.

No matter how good or bad your life is going, you can always find an excuse to give up. But it works the other way too.  If you look for a reason to keep going, you can find that too.

2.        When you quit, you send the message that you never thought you could do it in the first place.
Actions speak louder than words. In the end no matter what they hear you say, people will watch what you do.

3.        Believe it or not, some people will be glad that you quit.
They may not say it, but unfortunately many people you know will hope for you to give up. This is for the simple reason that your dedication to your goal will remind them of their own unrealized potential. Rather than proving your doubters right, let your dedication inspire.

4.     You’ll never know what would have happened if you stuck it out.
You know what happens if you give up — you end up right where you started. The hard part is having the vision to see the reward that lies at the end of the race.

5.     The consequences of quitting are a lot higher than sticking it out.
No matter how high a price you’ll pay to keep going, the price of abandoning your dreams carries the greater cost.

6.     When you quit, you set a mental precedent to quit again.
Think about a person who has tried to diet and failed several times. Their belief in their ability to lose weight is actually diminished by each abondoned attempt. Quitting and perseverance are both habit forming. Which habit do you want to develop?

7.     Anything worthwhile takes time, sacrifice, and effort.
The more difficult the challenge, the more rewarding the victory. The most meaningful accomplishments in life are those that don’t come quickly or easily.

8.    You’re a lot closer than you think you are.
Sadly, many people give up not realizing that success is right around the corner. There are not always clear markers in achieving a difficult goal.  The finish line could be just around the next bend.

9.     The process shapes you before success rewards you.
Setting difficult goals will stretch you, teach you perseverance and ultimately build your belief in yourself. It is the process that develops you. Greatness doesn’t come overnight, but it is forged by every inch of progress we fight for in pursuit of a worthwhile goal.

10.   Life is a lot more fun when you’re in the hunt for something.
We only get one life to live. When you’re fighting for a cause, a dream, or something greater than yourself you will find the enthusiasm, passion and joy that makes life a great adventure. The key is identifying your cause.

* I’d like to leave you with an inspirational poem by an unknown author. This famous poem is untitled, but it has been come to be known simply as “Don’t Quit.”

When things go wrong, as they sometimes will,
When the road you’re trudging seems all uphill,
When the funds are low and the debts are high,
And you want to smile, but you have to sigh,
When care is pressing you down a bit,
Rest, if you must, but don’t you quit.

Life is queer with its twists and turns,
As every one of us sometimes learns,
And many a failure turns about,
When he might have won had he stuck it out;
Don’t give up though the pace seems slow–
You may succeed with another blow.

Often the goal is nearer than,
It seems to a faint and faltering man,
Often the struggler has given up,
When he might have captured the victor’s cup,
And he learned too late when the night slipped down,
How close he was to the golden crown.

Success is failure turned inside out–
The silver tint of the clouds of doubt,
And you never can tell how close you are,
It may be near when it seems so far,
So stick to the fight when you’re hardest hit–
It’s when things seem worst that you must not quit.

Who Should You Never Date, According To Your Zodiac Sign?

I NEVER IMAGINED THAT TOOTHPASTE COULD DO SO MANY THINGS. CHECK THESE 20 AMAZING TRICKS!

The 30-Day Squat Challenge That Will Totally Transform Your Body

HOW DO YOU SHOW ANGER ACCORDING TO YOUR ZODIAC SIGN?

How to Protect Yourself as a Woman